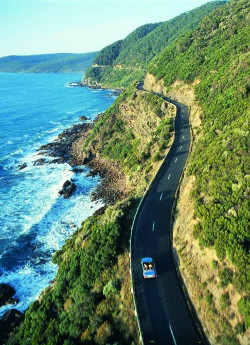 The Grampians is one of Victoria’s most popular natural attractions. Located north-west of Melbourne, it encompasses a huge national park which surrounds a series of mountain ranges. Visitors can explore many walking tracks including the Grampians Peak Trail, enjoy panoramic views from lookouts, and visit several lakes and waterfalls. It is a great place to encounter Australian wildlife, native wildflowers and discover historic Aboriginal sites.

At the heart of The Grampians is the tourist village of Halls Gap. Visitors will find shopping facilities, restaurants and a large concentration of accommodation options including caravan parks, holiday units, cottages and motels.

The distance, in a direct straight line, from Melbourne to Halls Gap is about 230 kilometres. There are a number of ways to get to The Grampians from Melbourne.

The journey from Melbourne’s CBD to Halls Gap is just over 250 kilometres.

Head west along the West Gate Freeway (M1), across the West Gate Bridge, and take the Western Ring Road (M80) exit which is about 6 kilometres after the bridge. After travelling on the Western Ring Road for 4 kilometres, take the Western Freeway (M8) exit. Keep following this freeway which will skirt around Bacchus Marsh and the city of Ballarat. The Western Freeway will become the Western Highway (A8), and the first town you will pass through the centre of will be Beaufort. Drive a further 44 kilometres until you reach the larger town of Ararat. Turn off the highway and onto Ararat – Halls Gap Road (C222), following this road to a T-junction just on the northern outskirts of Halls Gap. Turn left into Grampians Road (C216) and after a few short minutes, you will arrive within the centre of Halls Gap.

The entire journey will usually take around 2 hours and 45 minutes if you drive continuously. However it is recommended that you do not drive for more than 2 hours straight without taking a break.

Driving directions from Melbourne to The Grampians

Getting to Halls Gap from Melbourne using public transport requires the use of both train and bus services, however there are a couple of main options. Which one you choose may depend on how the timetables fit in with your personal travel plans.

Catch a V/Line train from Melbourne’s Southern Cross Station to Ballarat Station. This will take about 90 minutes, however some peak express services will complete the journey in a quicker time.

Once in Ballarat, switch to a V/Line bus which goes to Ararat and Stawell. This section of the journey will take about 90 minutes.

See the V/Line timetable which covers this entire travel option.

Option 2 – one train journey and one bus journey

Catch a V/Line train from Melbourne’s Southern Cross Station to Ararat Station. This will take between 2 hours and 10 minutes and 2 hours and 30 minutes depending on the time of day. See the timetable for the train to Ararat.

Once you arrive in Ararat, catch the Warrnambool bus and get off 50 minutes later at Halls Gap.  See the timetable for the bus to Halls Gap.

Take the easy option when heading to The Grampians and join one of the several guided day tours that depart from Melbourne. You won’t have to worry about how to get there or finding your way around when you arrive.  You will also have an experienced guide that will be able to transport you directly to the many attractions of The Grampians, with some interesting stops along the way.

Day tours of The Grampians can include guided walks to waterfalls, lakes and scenic lookouts. Experience close encounters with native wildlife, discover a rich variety of plant life and learn about the history and Aboriginal culture of the area.

If you are coming to Melbourne by air, see our guide to transport between Melbourne Airport and the city centre.  Once in Melbourne’s city centre, choose from the above options to get to The Grampians.

Phillip Island is one of Victoria’s most popular tourist destinations. It is well-known for its famous penguin parade, large fur seal colony,  native wildlife, exciting racing at the island’s Grand Prix circuit, its scenic coastline, quaint fishing villages, beautiful beaches, outdoor dining, and so much more.

The island’s reasonably close proximity to Melbourne makes it a popular choice for visitors, be it a day trip or longer stay.

As the crow flies, Phillip Island is only 75 kilometres from Melbourne.  There are a number of ways to get there.

Phillip Island is linked to the Victorian mainland by a bridge at San Remo. The distance to drive from the heart of Melbourne to the bridge is just over 120 kilometres.

The journey time is usually around 90 minutes.

Note that there is no car ferry to Phillip Island, so if you wish to bring your vehicle onto the island, you must use the bridge at San Remo.

A number of V/Line bus services run between Southern Cross Station in Melbourne and several towns on Phillip Island including Newhaven, Cape Woolamai, Surf Beach, Sunderland Bay and Cowes.  The journey from Melbourne requires a change of bus at Koo Wee Rup and takes around 2 hours to get to the bridge and a further 20 to 25 minutes to Cowes.

Refer to the V/Line timetable for Melbourne to Cowes.

By train and bus

Another option is to catch a suburban train service to Dandenong. From there, catch a V/Line bus that travels direct to Phillip Island. The train journey to Dandenong takes between 40 to 50 minutes, depending from which station in Melbourne’s city centre is used. The bus journey from Dandenong to the Phillip Island bridge takes around one hour and 45 minutes, and a further 20 to 25 minutes to Cowes.

Refer to timetable for Melbourne to Cowes which also includes details of the train service to Dandenong.

By train and ferry

For something a little different, you can catch a suburban train from Melbourne to Frankston (1 hour), then switch onto a diesel service which runs from Frankston to Stony Point (35 minutes).

From Stony Point Jetty, board the Inter Island Ferries passenger catamaran which docks at the Cowes Jetty.  The boat trip takes around 45 minutes, usually with a stop at French Island.

By car and ferry

If you have a vehicle but don’t want to drive all the way around the eastern side of Western Port to the Phillip Island bridge at San Remo, you can instead drive to Stony Point and catch a passenger ferry from there.

Head south-east along the Monash Freeway (M1), take the South Gippsland Freeway (M420) exit and continue along that road which becomes the Western Port Highway (M780/A780) and ends up at Hastings.  Alternatively, take the EastLink (M3) exit off the Monash Freeway, then the Peninsula Link (M11) exit and follow that freeway to the Frankston-Flinders Road (C777) exit which takes you to Hastings.

Once in Hastings, follow the Frankston-Flinders Road (C777) to Bittern where there is a turn-off to Stony Point Road (C786) which ends up at the Stony Point railway station and jetty.

There is a public car park in the vicinity of the railway station and jetty. Alternatively, secure parking is available for a nominal daily fee at the Stony Point Caravan Park.

From Stony Point Jetty, board the Inter Island Ferries passenger catamaran which docks at the Cowes Jetty.  The boat trip takes around 45 minutes, usually with a stop at French Island.

Did you know that Phillip Island has its own airfield?  So you can get to the island by air!

Fronting Phillip Island Road at Newhaven are Phillip Island Helicopters who not only conduct scenic flights, but also offer charter services.  In just 30 minutes, you can be flown from suitable landing locations in Melbourne, such as Essendon Airport or Moorabbin Airport, directly to Phillip Island. Avoid the traffic and save time! See  www.phillipislandhelicopters.com.au for further details.

Take the hassle out of getting to Phillip Island and finding your way around by joining one of the many guided day tours that departs from Melbourne.

Day tours include a range of activities such as a visit to the famous Penguin Parade and eco-tours that explore the island’s diverse flora and fauna. Tours may also include visits to Churchill Island, the Koala Conservation Centre, The Nobbies and the island’s beautiful coastline and beaches.

If you are coming to Melbourne by air, see our guide to transport between Melbourne Airport and the city centre.  Once in Melbourne’s city centre, choose from the above options to get to Phillip Island.

Thoughts from us at Travel Victoria. A range of content for either travellers or visitors to Victoria and Melbourne, and for those working in the tourism industry.