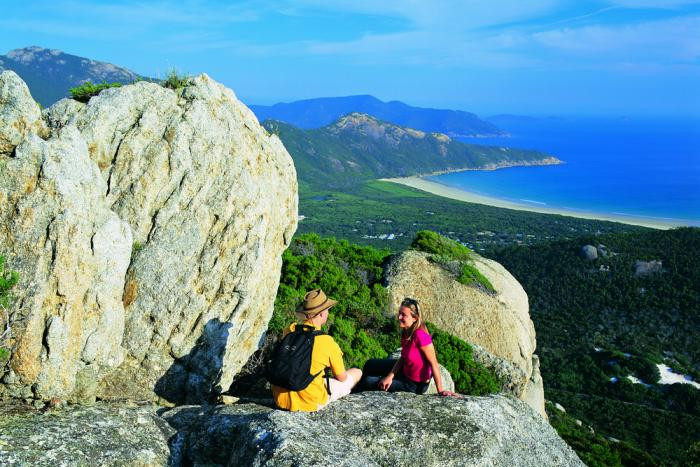 Wilsons Promontory is a peninsula at the southernmost tip of of Victoria that is surrounded by water on three sides and extends into Bass Strait.

The Wilsons Promontory National Park covers around 50,000 hectares of this peninsula, consisting of stunning granite mountain peaks, beautiful beaches, lakes, forests and gullies.  It is home to a large population of wildlife including kangaroos, emus, echidnas, wombats and birdlife.

Within the national park is the small town of Tidal River which has a visitor centre, general store and cafe.

In order to get to Wilsons Promontory, there are a number of transport options available.

One of the best ways of getting to Wilsons Promontory is to drive, so you have the flexibility of stopping at a number of interesting spots along the way.

The driving distance from Melbourne’s CBD to the Wilsons Promontory town of Tidal River is just over 220 kilometres.

Stay on the South Gippsland Highway as you pass through the towns of Korumburra, Leongatha and Meeniyan.  On the outskirts of Meeniyan, turn right onto Meeniyan-Promontory Road (C444) and follow this to Fish Creek where you will need to make a right turn in order to stay on the Meeniyan-Promontory Road (C444).  This road passes through Yanakie, which is located 6 kilometres from the entrance to Wilsons Promontory National Park.  Once inside the park, it is a further 25 minutes drive to Tidal River.

The entire journey normally takes around 2 hours and 50 minutes if driving non-stop, although it is recommended to take at least a short break due to the duration of the trip.

The first step is to catch a bus to Fish Creek.  There is a V/Line bus service which runs between Southern Cross Station in Melbourne and Yarram, stopping at Fish Creek in front of the Fish Creek Hotel and BP service station.  This bus service runs 7 days a week, with extra services on weekdays.  See the V/Line bus timetable to Yarram via Fish Creek.

Once in Fish Creek, a taxi or private transport service will be required for the final 55 kilometres of the journey to Tidal River as there are no public bus services to Wilsons Promontory.  Options include:

A hassle free way of getting to Wilsons Promontory and exploring its many natural attractions is by joining a guided tour that departs from Melbourne.

Bunyip Tours offer a full day excursion to Wilsons Promontory.  You are picked up from Melbourne early in the morning and return in the evening.  Your tour guide will take you on a number of activities which highlight the beauty of the area.  Enjoy bush walking, bird watching, wildlife spotting and even swimming if the weather and time permits.  See beautiful beaches, huge granite rock formations, eucalyptus forests and warm temperate rainforests.

For those who want to see more of the area, Bunyip Tours also offer a 2 day Wilsons Promontory excursion which is combined with a day at Phillip Island.  See stunning surf beaches, the Koala Conservation Centre, The Nobbies and of course the famous nightly penguin parade.  Overnight accommodation on the island is provided, then the next morning you are driven to Wilsons Promontory to explore the highlights of the park on foot by joining the regular day tour.

If you are coming to Melbourne by air, see our guide to transport between Melbourne Airport and the city centre.  Once in Melbourne’s city centre, choose from the above options to get to Wilsons Promontory.

Many people operating businesses in the travel and tourism industries will be familiar with the long-running false billing scams perpetrated by Amanda Jane Stichbury and her companies Accommodation Find Pty Ltd, Internet Find Pty Ltd, and Special Days Pty Ltd.

Many businesses were sent either invoices or renewal letters concerning advertising on her large network of websites.  Most advertisements were never ordered or authorised, so some businesses were tricked into paying the invoices that arrived, assuming it was an ongoing service.

Some of the websites that Amanda Stichbury set up had names that closely resembled names of official government tourism authorities, confusing and potentially deceiving many business owners.  This attracted significant attention from many tourism bodies across Australia who regularly published warnings about the sorts of invoices and renewal letters that Amanda Stichbury and her network of websites were regularly sending out.

In 2014, Amanda Stichbury was fined almost $20,000 for breaching Australian Consumer Law in regards to unsolicited invoices and requests for payments.  However, this didn’t deter her from continuing her existing business model which was recently described by the Office of Fair Trading (OFT) in Queensland as being “based almost entirely on deception” and “preying upon time-poor businesses“.

In January 2017, Amanda Stichbury was fined a further $50,000 in the Southport Magistrates Court after a lengthy investigation by the OFT.  A total of 166 charges were made, including:

Businesses across Australia, not just those in the travel and tourism industry, were on the receiving end of unsolicited invoices requesting payment for advertising that was never ordered.  The dodgy invoices included wording which implied an existing business relationship, which was false.

While the full extent of Amanda Stichbury’s fraudulent operations may never be known, it is reasonable to conclude that incidents that were brought up in court proceedings were just the tip of the iceberg.  Most business owners who identified the invoices and renewals being sent to them as fraudulent simply threw them away and didn’t report it to the appropriate authorities.  Some who did pay wrongly assumed it was for a similarly named organisation they already advertised with and just kept paying.

Executive Director of the Queensland Office of Fair Trading, Brian Bauer, commented on the verdict and fine handed down against Amanda Stichbury by the  Southport Magistrates Court. He said that it:

He also said that the OFT will “continue to vigorously pursue any unscrupulous traders” like Amanda Stichbury who intentionally mislead other businesses.

If you have received a fraudulent invoice from Amanda Stichbury, Accommodation Find Pty Ltd, Internet Find Pty Ltd or Special Days Pty Ltd, you can report it at www.qld.gov.au/fairtrading.

Amanda Stichbury “did not appear apologetic”

Despite being fined almost $20,000 and convicted for similar offences in 2014, the Southport Magistrates Court noted that “Ms Stichbury did not appear apologetic for her behaviour” during proceedings in January 2017.  Her lack of remorse contributed to the hefty penalty of $50,000 that was imposed upon her and her companies.

Since 2011, many organisations in the tourism and travel industry have received from their clients copies of fraudulent invoices sent to them by Amanda Stichbury’s network of websites.  The big breakthrough in public exposure came when AccomNews published a series of articles about Amanda’s activities a few years ago:

AccomNews is a leading industry-wide portal providing critical information to those in the accommodation industry and the publisher of the widely distributed monthly Resort News magazine.  Their articles received widespread exposure and resulted in many people coming forward who had also received unsolicited bills and renewal letters for advertising they never ordered.

The increasing number of reports being published on the internet about Amanda Stichbury’s fraudulent activities resulted in bad publicity for her business.  She contacted a number of the more higher profile publishers, demanding they remove their articles about her.  At least one organisation was also threatened with legal action on the basis that the information published about her and her business operations was not only misleading, but was also causing her loss of income.  Ironically, while this may have caused her income to reduce, it actually saved many businesses from losing money themselves once they realised the invoices and renewal letters were a scam.  In fact, the Office of Fair Trading made it very clear after its successful court action that Amanda Stichbury operated a business model that was “based almost entirely on deception“.

Some of the organisations that published information about Amanda Stichbury’s fraudulent activities include:

Amanda Stichbury has attempted to get negative publicity about her business activities pushed down internet search engine results that referenced her name, company names, website names and phone numbers.  This was done by publishing large numbers of web pages with her name in the title or document body in order to dilute any negative page headings that came up.  The snippet below of a Google search for her name shows one negative result swamped by other pages created by Amanda Stichbury.

In closing, the Queensland Office of Fair Trading warned all businesses to “be vigilant when paying invoices, ensuring the payments are for services that were legitimately provided“.  If this vigilance is exercised, then false billing scams won’t succeed.

Details of the companies prosecuted in court

“Local fraudster all stitched up”
Queensland Office of Fair Trading
“…Ms Stichbury’s businesses, Accommodation Find Pty Ltd, Internet Find Pty Ltd, and Special Days Pty Ltd, sent unsolicited invoices to several businesses nation-wide requesting they pay for services that were never requested or authorised…Amanda Jane Stichbury pleaded guilty to a total of 166 counts, including sending another person an invoice for unsolicited services, and making false and misleading representations…Ms Stichbury was personally fined $10,000 and three corporations of which she was sole director were fined a total of $40,000…”
https://www.qld.gov.au/law/laws-regulated-industries-and-accountability/queensland-laws-and-regulations/fair-trading-services-programs-and-resources/fair-trading-latest-news/media-statements/local-fraudster-all-stitched-up/

“Queensland business owner fined $50,000 after pleading guilty to sending unsolicited invoices”
Smart Company
“…Stichbury was fined $10,000 in the Southport Magistrates Court earlier this month, and her three businesses were fined a total of $40,000…the success and prevalence of such scams are a symptom of a busy society…a successful scam like this can go uncovered for a long time…”
http://www.smartcompany.com.au/finance/fraud/82023-queensland-business-owner-fined-50000-pleading-guilty-sending-unsolicited-invoices/